Closets As Big As Some Apartments

The latest must-have turning up in some of the city’s most expensive condominiums is something that might seem mundane to home buyers in many other parts of the country: spacious master-suite closets.

Playing up the sheer luxury of having enough space to store your stuff, many developers are going well beyond standard 24-inch-deep reach-ins and run-of-the-mill walk-ins to create closets where you might actually want to spend time.

The new closets of choice are full-fledged dressing rooms the size of stand-alone bedrooms, arrangements with two separate walk-ins for couples, and windowed rooms with precious natural light and views that were once reserved for the main living areas.

“Frankly, with every building we do, the closet space is larger than the last building we did,” said Kevin Maloney, the founder of the Property Markets Group.

At 10 Sullivan in SoHo, a condo project that Property Markets is developing with Madison Equities, many larger apartments have expansive windowed dressing rooms measuring roughly 9 by 16 feet.

“We’ve reduced the size of the bedrooms and pushed that space into the closets, because the luxury buyer is looking for that large closet space,” Mr. Maloney said. “They want the big walk-in, with a shoe counter in the middle and all the bells and whistles.”

He employed the same strategy at Walker Tower, a condominium at 212 West 18th Street completed in 2013, he said, to create dressing rooms that are “probably three times what you would consider a reasonable walk-in closet.” And he is now doing the same for a new condo project at 111 Leroy Street.

Jonathan J. Miller, the president of the appraisal firm Miller Samuel, estimated that master bedroom walk-in closets in top new apartments are nearly 30 percent larger than they were in the last development cycle, before the financial crisis of 2008, while the overall size of those apartments has grown by only about 10 percent.

“When I started in the mid-80s, closets were few and far between — very tight, not very deep, and not a lot of walk-ins,” Mr. Miller said. “It’s the polar opposite now.” 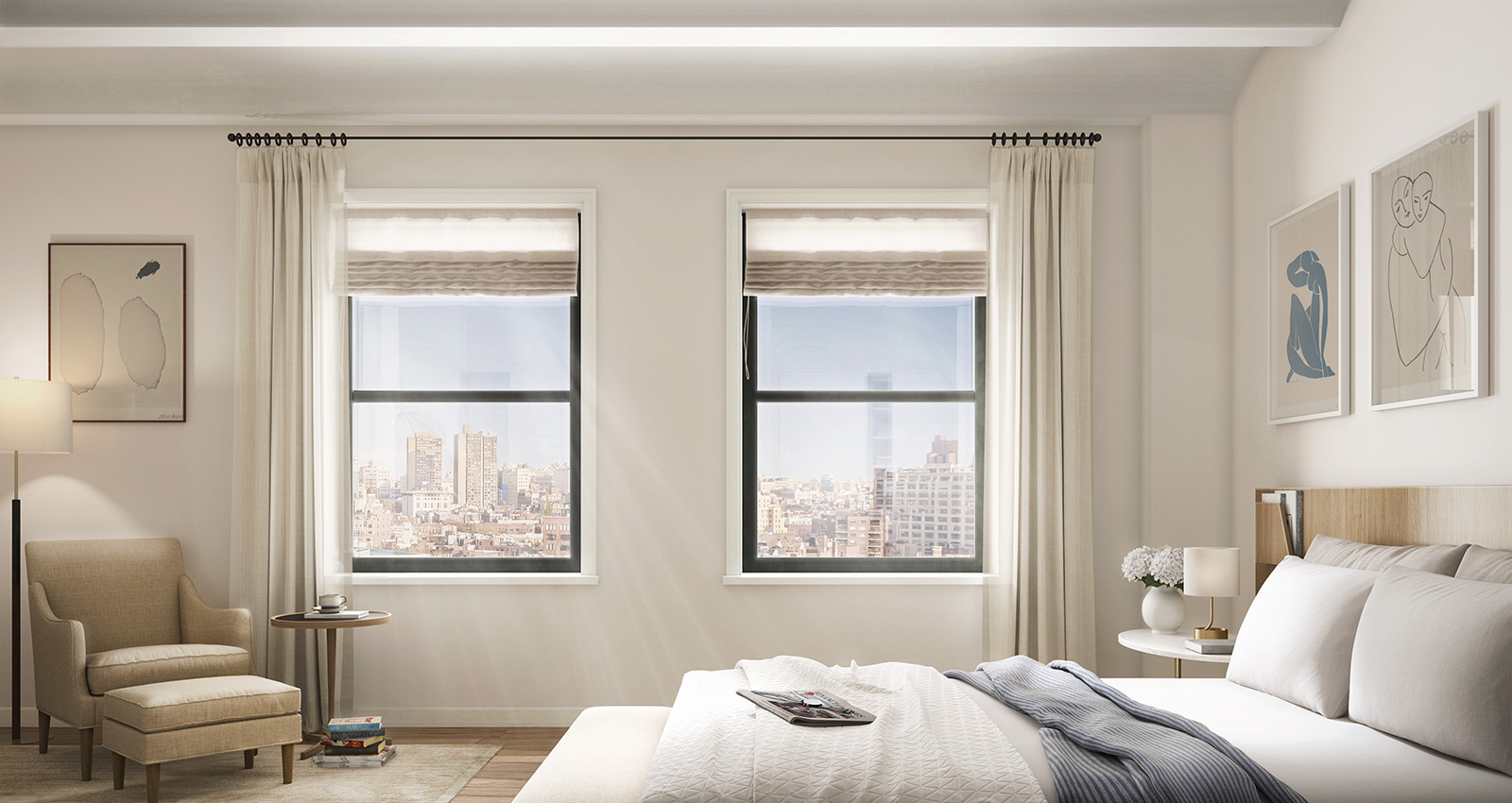 At the Shephard, a condo project by the Naftali Group at 275 West 10th Street, the largest walk-in closets measure nearly 20 by 10 feet, and some have windows. “That’s like a studio apartment,” said Christine Gachot, an owner of Gachot, the design firm that conceived the floor plans. Well, almost. City zoning requires all new apartments to be no less than 400 square feet, although one micro apartment project received a waiver to build studios as small as 260 square feet.

“The one thing we, as New Yorkers, lack in our lives is storage,” Ms. Gachot said. “Most of us don’t have a basement or an attic, so it’s a wonderful attraction.”

Some units at 1110 Park Avenue have windowed walk-in closets. “There’s a lot of high-end product on the market now, so people have a choice,” said David von Spreckelsen, the president of Toll Brothers City Living, New York, which is developing the building. “If you’re providing this, and someone else isn’t, you clearly have an advantage over the competition.”

For the Puck Penthouses, six condos atop the Puck Building at 293 Lafayette Street, the Kushner Companies included two dressing rooms in every master suite so couples don’t have to share. “In luxury dwellings, you’re seeing more and more people who want personalized closets,” said Deborah Grubman, an associate broker at the Corcoran Group who is the sales director for the project.

Both the Chatsworth, a project by the HFZ Capital Group at 344 West 72nd Street, and 20 East End Avenue, by the Corigin Real Estate Group, have numerous apartments with bedroom-size, windowed or double dressing rooms.

“They are delivered very basic, because custom closets are a very personal thing,” she said. “Someone might be tall and wear a lot of gowns, or they may be very casual and need more folding and drawers.”

To help finish the dressing rooms at 20 East End Avenue, the sales team has partnered with Transform, a custom storage company that buyers can hire to measure and prefabricate closet components for immediate installation upon closing, at the homeowner’s expense.

Laurie Dowley, 61, and Thia Breen, 65, both beauty industry executives, are in contract to buy a four-bedroom apartment in the building with a dressing room measuring about 10 by 10 feet, with an expected closing later this year. At their current home, “We have a small walk-in closet, but not something where you can go in and have your jewelry and everything there, all custom done,” Ms. Dowley said. “It’s a true form of luxury that we’ve never had before.”

They are in the process of having the dressing room designed, and don’t yet know the cost, but Ms. Dowley said, “We’re not going to skimp.”

Melanie Charlton, the chief executive and founder of Clos-ette, a custom closet company that recently designed a dressing room for a buyer at 1110 Park Avenue, said the cost of completing a high-end space can exceed $250,000.

“Oftentimes, it’s where some of the most expensive items in a home are stored — clothing and jewelry,” she said, suggesting that splurging on a dressing room might not be as outrageous as it sounds.

The trend isn’t limited to new developments. “We see people who will bunk their kids, and then make the second kid bedroom a dressing room,” Ms. Charlton said. “They’re giving themselves that master suite they always wanted.”

One of Ms. Charlton’s clients is Tracey Huff, who spent about $200,000 having Clos-ette and the interior designer Tony Ingrao convert a former bedroom to a dressing room while renovating her Upper East Side apartment in 2013.

With everything in its place, she noted, “getting dressed in the mornings is a joy.”

Homeowners willing to accept a more basic setup can outfit a dressing room for far less. When Alfred Padilla and Katrina Seitz toured a townhouse in Bedford-Stuyvesant, Brooklyn, earlier this year, storage space was top of mind.

“The minute I saw the third bedroom, I instantly knew it would be the closet,” said Ms. Seitz, 45, the director of e-commerce for a hair care company.

Mr. Padilla, 47, a filmmaker, explained, “We don’t have any kids, so the third bedroom wasn’t really necessary for us.”

After buying the house in May for $949,000 with the help of their agent, Bren Salamon at Douglas Elliman Real Estate, they hired California Closets to convert the room with simple Shaker-style shelving, drawers and hang bars for about $5,000 last month. Then they added a rug, and plan to place a bench at the center of the room.

“It’s a shared closet space,” Ms. Seitz said. “Although, as Alfred has pointed out, it will be mostly mine.”