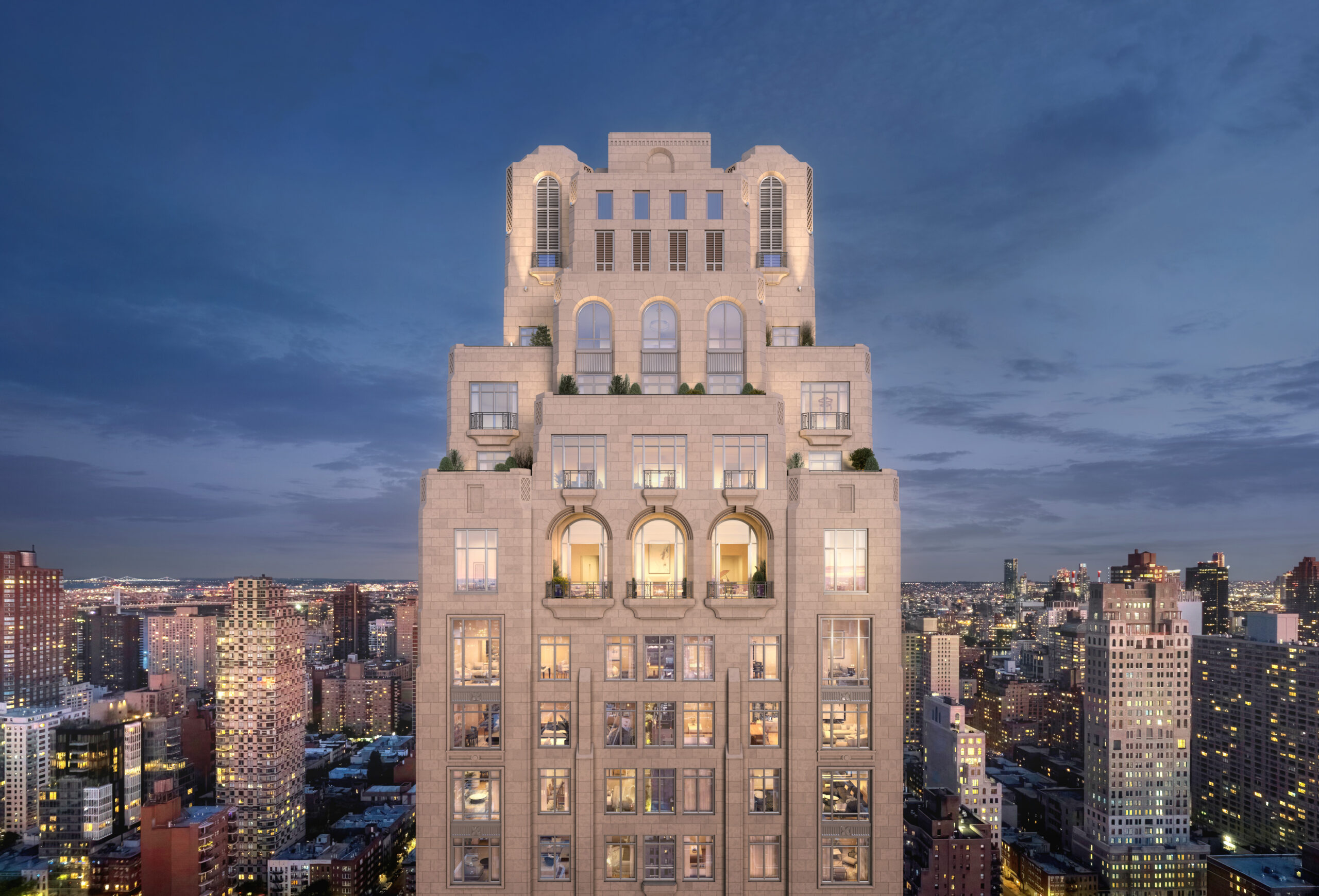 While our once-novel glass towers are starting to lose their shine (and evidently killing our bird population), stone and
craftsmanship endures, and are attracting New York’s latest crop of international robber barons who are proving money
can, in fact, buy taste. Earlier this year, Naftali Group in partnership with Rockefeller Group topped off construction on their
latest condo venture at 200 East 83rd Street on the Upper East Side. Sales are poised to begin later this year on its 86
one- to six-bedroom homes priced from $2.05M to $32M according to a recently approved offering plan. The total sellout
tallies to a mighty $544.3 million, which would make it one of the biggest condominium offerings to come to the tony
neighborhood.

The prime site lies at the southeast corner of Third Avenue and East 83rd Street, a short walk to the Metropolitan Museum
of Art, Central Park, and the Lexington Avenue line’s 86th Street subway station. The assembled parcel previously held a
huddle of ubiquitous albeit rapidly disappearing pre-war walk-ups, which were expeditiously put to rest in 2019. According
to The Real Deal, the team acquired much of the assemblage from Muss Development and the Aryeh family for $167
million in March of that year.

Project plans were submitted in spring 2019 calling for a soaring high-rise designed by the one and only Robert A.M. Stern
Architects. Later that year, the team secured $176 million in financing to begin work on the 250,000-square-foot project.
Fast-forward two years and a pandemic later, the building’s glowing cast-stone skin is nearly complete. A new set of
renderings posted by the Rockefeller Group gives us our first look inside the high-flying residences that are adorned with
Stern’s timeless flair.

The 86 residences will average more than 2,000 square feet each and a handful of units, including the three penthouses,
will come with some form of private outdoor space. As with many Robert A.M. Stern Architects-designed buildings, the
opulence of the exterior is promised to be carried through to the interiors.

There will be no more than three residences per floor above the seventh level. Floors 32 and 33 will be full-floor
penthouses while the uppermost penthouse will be a duplex spanning 34th and 35th levels. One-beds measuring from
984 square feet start at $2.05M, two-beds start at $3.175M, three-beds from $4.35M, and four-beds from $5.35M. The
upper third of the tower is dominated by large three-to six-bedroom residences. The capacious penthouse units span up to
6,592 square feet in size and have sticker prices starting at $23 million.

In-house bells and whistles are to include a porte cochère and a 26-vehicle automated parking garage, resident storage,
bike room, and a library. The 17th floor will be exclusively devoted to resident pampering. It will have a swimming pool,
lounge, steam room, sauna, and common outdoor loggia. Other shared features include a fitness club, yoga room,
children’s playroom, media room, common terrace, and a garden.

At 35 floors and 489 feet tall, the spire is the seventh-tallest building on the Upper East Side, behind 520 Park
Avenue, Trump Palace, The Belaire, Bristol Plaza, One East River Place, and the recently finished 180 East 88th Street. In
this rarefied air, the building is poised to become the preeminent residential building in the area, providing graciously
scaled homes and astounding views of the skyline, Central Park, and the East River. The building is now clearly visible
from many parts of the park and the city including from the Jacqueline Kennedy Onassis Reservoir shown above.

Earlier this year, the tower received its first pre-cast stone panels, which are accented with classically inspired motifs. The
tower also provides an elegant symmetrical massing with several setbacks and a finely articulated crown. A sole leaked
rendering shows that the facade will feature arched windows, loggias, and several beautifully integrated balconies and
terraces.

200 East 83rd Street faces competition from an ever-growing list of top-of-the-market condos, several of which were also
designed by Robert A.M. Stern Architects. While this project falls just short of the 500-foot/50-floor cutoff that typically
defines the minimum height of a skyscraper, our custom High-Rise Condo Index, which tracks the average sales prices
of Manhattan condos of more than 500 feet tall, shows that sales in the city’s tallest buildings have softened quite a bit.
220 Central Park South drove the index’s cumulative closing average to a record high of $3,339 per square foot in 2019.
Now with the building nearly sold out, coupled by a pandemic-battered market, the overall closing average has come down
by 30%. However, an incredbile number of contract-signings in not-so-tall forthcoming condos in the area, such as The
Benson, 1228 Madison Avenue, and 150 East 78th Street hint at brighter days for the East Side’s uber-luxury market.

Naftali Group, led and founded by Miki Naftali, has completed a number of well-regarded condominiums in the city that
include The Shephard in the West Village, The Seymour in Chelsea, and a pair of opposing condos at 210 and 221 West
77th Street on the Upper West Side. All of Naftali’s projects to date have employed a traditional aesthetic and have sold
near the upper echelons of prices within their respective neighborhoods. Naftali’s project partner, the Rockefeller Group,
has nearly completed construction of their first Manhattan residential building named Rose Hill. The 123-unit NoMad
condo designed by CetraRuddy will open for occupancy in 2021 and has homes available from $1.4 million.