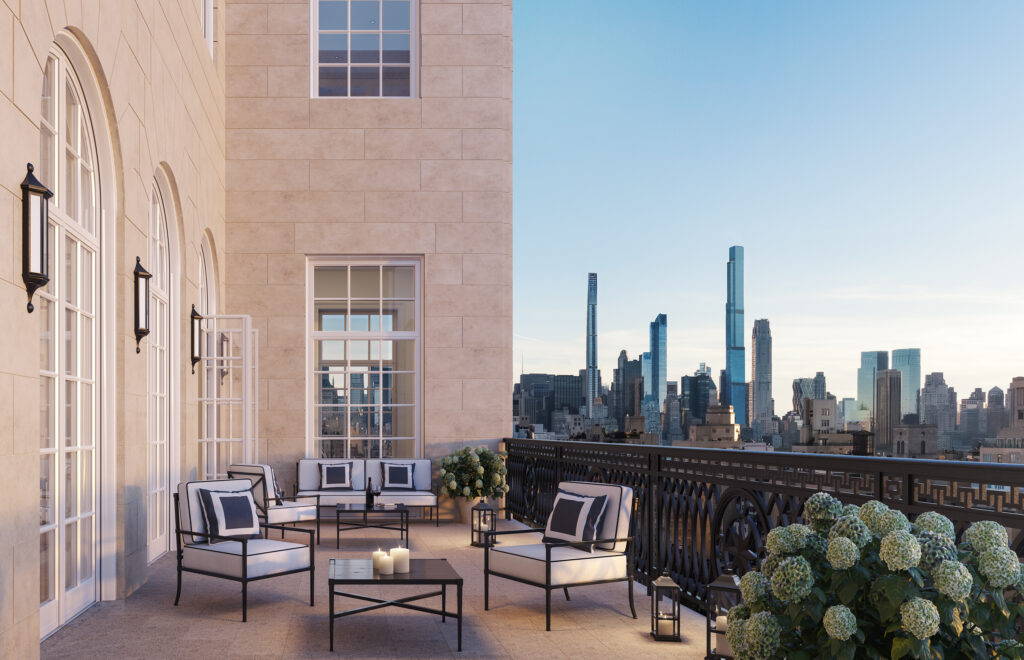 Acclaimed real estate developers, The Naftali Group, are setting out to prove that Israelis have what it takes to make the American dream come true.

Construction is almost complete at The Benson, an 18-story condominium building at 1045 Madison Avenue. As reported by NY Yimby, the 210-foot-tall building, between East 79th and East 80th Streets in the Upper East Side, will offer 16 luxury residential condos spanning 59,032 square feet in all, as well as 3,993 square feet of retail space on the ground-floor. Developed by The Naftali Group, which is led by CEO and Chairman Miki Naftali, and designed by Peter Pennoyer, the project includes three penthouses, and the average unit includes a full-floor design, averaging 3,700 square feet per apartment.

The Benson apartments offer high ceilings and oversized windows as well as chef’s kitchens with state-of-the-art appliances, and heated flooring in the bathrooms. Situated blocks from Central Park, the upper-floor units boast views of the park, Midtown and the Hudson River. Residents can enjoy amenities including a 24-hour doorman and concierge, a spa with a steam room and sauna, a fitness center with a basketball court, an indoor theater, a children’s playroom, a top-floor bar, a library with a reading garden, and a pet spa. The Benson is scheduled for completion sometime later this year. Sales opened last September, and Naftali has said they swiftly sold out, despite the effects of the pandemic.

“The Benson is a cosmopolitan design.The form of the tower was inspired by the ingenious set-back compositions of the classical apartment houses of the 1920s by such luminaries as Rosario Candela, while its details–such as the carved, chamfered corners–and decorative ironwork reflect the svelte, urbane Art Deco architecture of the boulevards of Paris, “ said Peter Pennoyer of Peter Pennoyer Architects.

Peter Pennoyer is one of the most talented American architects working today. He is the principal partner of his eponymous, New York-based architecture firm which has sixty members and handles commissions the world over. Peter “has made the study of history a generating force in his work and believes that by mastering the interpretation of architectural history, he and his colleagues design projects that are both modern and classical.” Peter’s firm is currently designing projects spanning from Hong Kong to Florida and include residential, institutional, and commercial buildings. Peter serves as adjunct professor in the Architecture and Urban Studies program at New York University and works as an advocated for historic preservation.

The Naftali Group is no newcomer to NYC’s upscale residential buildings. Last week, Naftali commented on the sale of a penthouse in another of their condo buildings. A new penthouse at the Bellemont Condo, at 1165 Madison Avenue, also on the Upper East Side, went to contract for $66.5 million. The combined four-floor unit boasts about 13,000 square feet of space, with another 2,300 of outdoor space, Naftali said.

Speaking to the Wall Street Journal, Naftali said the buyer is combining the top two units at the Bellemont but declined to disclose the identity of the buyer. He did say that the purchaser is a New Yorker.

Naftali did say that the buyer is paying slightly more than the full asking price for the developer to deliver a combined unit with its own elevator. Alexa Lambert and Alison Black at Compass are marketing the project.

The WSJ reported that “the deal is among the most expensive above 59th Street on the Upper East Side. The current record was set in 2015, when a Fifth Avenue co-op sold for $77.5 million, according to research and appraisal firm Miller Samuel. A townhouse on East 67th Street traded for $77.1 million in 2019, records show.”

Jonathan Miller of Miller Samuel told the WSJ, “That kind of price point in this neighborhood is rare. Within the condo market itself, the only activity north of that number has been in one building: 520 Park Avenue.”

Naftali, an Israeli army veteran, has extensive experience working in Israeli commercial real estate, investment and development, and first started out in New York with Elad Properties, which began as just a small office in Fort Lee, NJ. The Naftali Group now boasts a real estate portfolio of luxury residential properties worth an estimated $12 billion in prime locations. Among Naftali’s expertise is reviving iconic properties, as he did in Elad’s $450 million restoration of the legendary Plaza Hotel.