DOUBLE OR NOTHING: Real estate developer Miki Naftali is doubling up 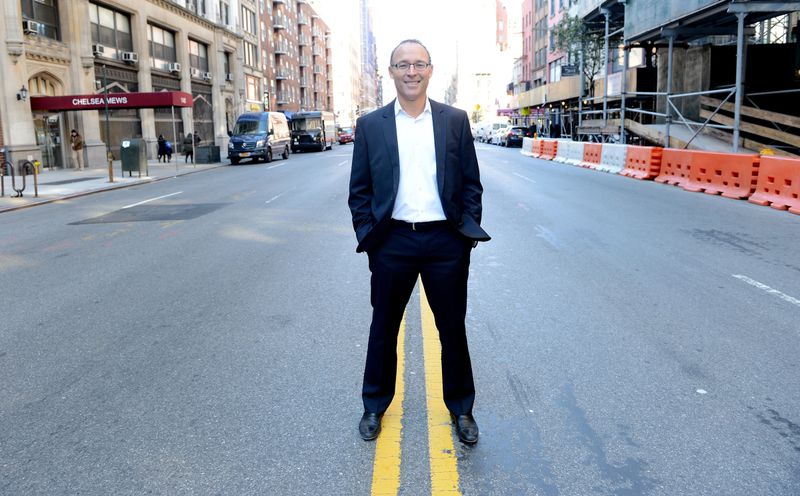 Developer Mik Naftali is doubling up on locations on the Upper West Side and in Chelsea.

It’s a real estate doubleheader. One savvy New York City developer is so confident in the future of the Manhattan condo market that he’s building two residential towers on the same block on the Upper West Side. He’s confident in the strategy because the same bet is already paying off for him on the same block in Chelsea.Prolific real estate mogul Miki Naftali has two new luxury residential projects underway on W. 77th St. between Broadway and Amsterdam Ave. and another two on W. 25th St. between Seventh and Eighth Aves.

Naftali’s strategy is a gamble that the Manhattan real estate market will stay hot in micro markets on the West Side of Manhattan at a time when fellow developers warn that the luxury bubble may be about to pop.“We’re going back to the basics of real estate: Location, location, location,” the developer told the Daily News. “When you have a great location, you can’t go wrong.”Naftali, the man behind the 2005 renovation of The Plaza hotel, is not the first developer to do two projects in the same neighborhood. But it’s unusual— some say near impossible — to find two prime sites ripe for residential development on a single city block in Manhattan’s most sought-after neighborhoods. 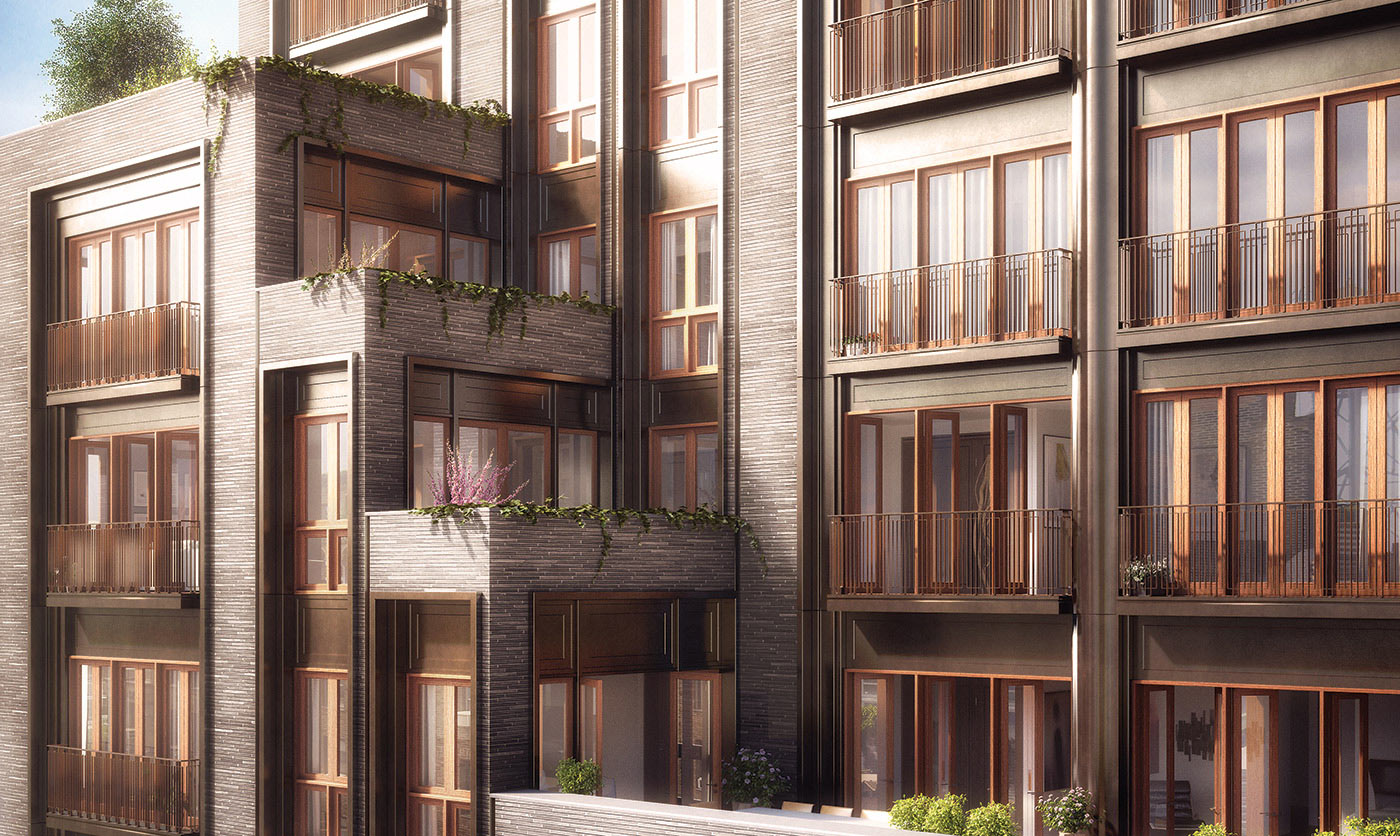 “It’s very rare to have an opportunity to really make a significant impact on a single block,” Naftali said. “It’s exciting for us (to influence) the look and feel of the street and the neighborhood.”

Some observers say it’s a risky move to take on two sites in the same location — if you’ve made a bad bet, you’ve essentially made it twice — but double the risk can mean double the reward for investors who choose locations wisely. Any value added to the block by construction of the first building will pay a dividend when the second launches sales.

“You should never pass up a chance to purchase your neighbor’s property,” said David Schechtman, a commercial broker at Eastern Consolidated.

In other words, no one wants to let a competitor buy the site next door and reap the benefits that come from a new building next door.

“When you’ve got the right location, it makes sense,” said real estate marketing guru Andy Gerringer of The Marketing Directors. “It’s smart to double up as long as you’re paying the right price for the land.”

On the short block of W. 77th St., where Naftali’s glitzy new structures will replace two parking garages, the developer believes he has found an evergreen location that will attract wealthy buyers looking for homes on the historically under-served Upper West Side — and he paid big to lock it in.

This empty site on 25th St. will be replaced by a new condo building

He forked over $55 million for the first site, at 210 W. 77th St., after a heated bidding war last year and is in the midst of building a new 18-story, 25-unit tower with asking prices between $4.85 million for a three-bedroom apartment and $21 million for a duplex penthouse.

Then, this summer, the developer paid $61 million for a site across the street at 219 W. 77th St. that formerly housed a five-story parking facility. He’s now planning a new building, also with 25 condos likely as pricey as the others.

And Naftali hopes to maximize his rewards even further by sprucing up the block itself. He said he hopes to redo the sidewalks, plant additional trees and even potentially add a seating area to the formerly industrial block in an effort to make it more attractive to prospective residents. He declined to provide further details on his proposals, which he plans to submit to the city, which typically has responsibility over streetscape improvements. 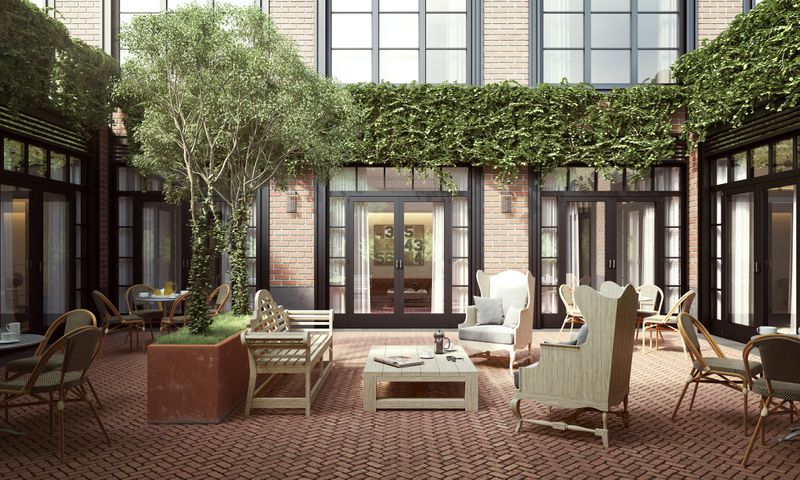 Once completed, the Seymour will have a beautiful interior courtyard.

Of course, fancy improvements are a luxury Naftali can ill afford if the market for his condos goes bust. Already, there are rumblings of a coming collapse.

“How many people are there in the world that can afford to pay $20 million or $25 million for an apartment?” real estate titan Ofer Yardeni of Stonehenge Properties said last month. “I don’t want to say that the market is dead, but it’s on life support.”

Then again, Naftali is only trying to move 50 apartments — in one of Manhattan’s most desirable neighborhoods. 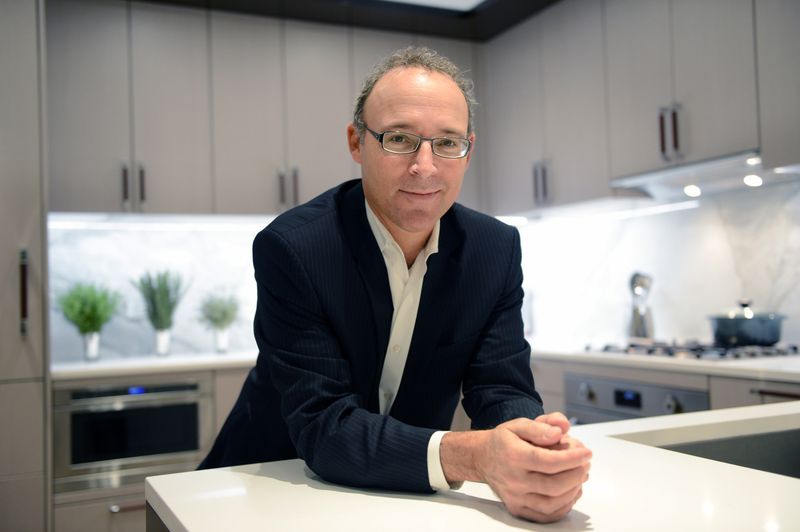 Developer Miki Naftali poses in the sales office for the Seymour condominium in Chelsea.

“If these were two 100-unit projects, there might be reason to worry,” Gerringer said. “If you were doubling down in a less established neighborhood like Harlem or in a neighborhood with too much product like the Upper East Side, then that would be a different story.”

Indeed, Naftali’s strategy has already proved successful in Chelsea, albeit on a slightly less risky pair of projects.

The developer snagged adjacent buildings on W. 25th St. between 2012 and 2013, opting to transform a pre-war structure at 245 W. 25th St. into a fancy rental building, which he dubbed the Arthur. 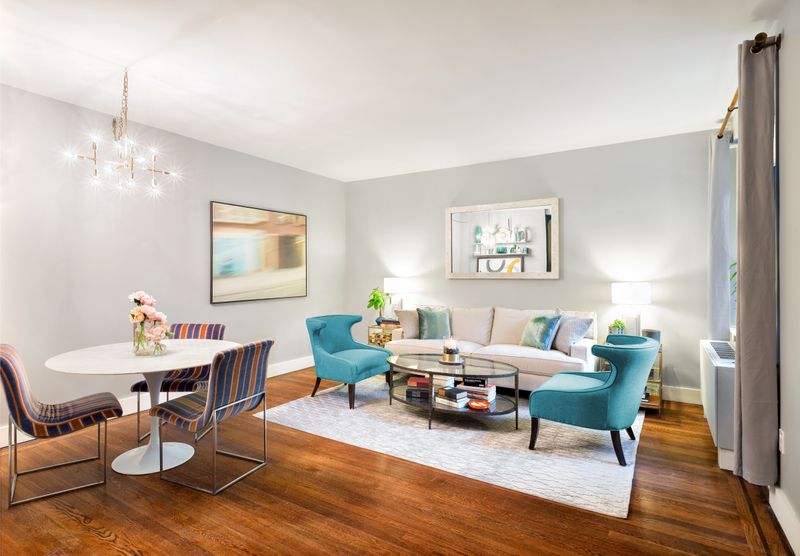 Next door to the Seymour, Naftali is marketing revamped rental units at the Arthur.

Naftali secured the sites in a tricky deal, negotiating to buy buildings belonging to three separate owners before land prices went through the roof. Now, he’s reaping the rewards.

“There are now a lot of newcomers in the market who think they are joining the party, but they’re too late,” he said.