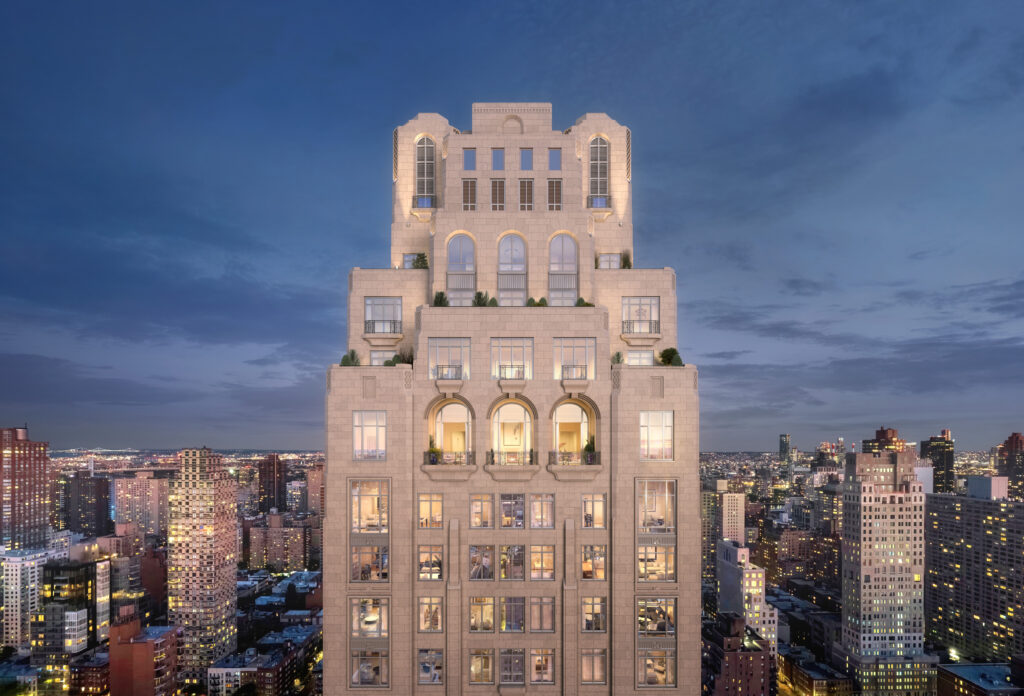 Façade installation is nearing completion on 200 East 83rd Street, a 35-story residential tower on Manhattan’s Upper East Side. Designed by Robert A.M. Stern Architects and developed by Naftali Group and Rockefeller Group, the 449-foot-tall structure will yield 86 units spread over 205,877 square feet, averaging 2,393 square feet apiece. Sales for the homes are currently underway and are being handled by Compass. SLCE Architects is the architect of record and Leeding Builders Group is the general contractor for the project, which is located at the corner of Third Avenue and East 83rd Street.

The limestone cladding has finished enclosing the upper levels of the tower since our last update in November, when the final portions of the crown remained exposed. The construction crane has also been dismantled and more windows have been installed.

Each side of the crown features a different design, with numerous arched windows and chamfered corners. The western elevation is the only symmetrical face of the crown. Several light fixtures have already been installed around the corners and will eventually illuminate the façade, highlighting the intricate ornamental details of its prewar-inspired appearance over the Upper East Side.

The larger arched openings around the midpoint of 200 East 83rd Street are still boarded up with wood but will soon be finished with tall windows.

200 East 83rd Street is expected to include 3,033 square feet of ground-floor retail space with frontage on both Third Avenue and East 83rd Street, and an additional 26 enclosed parking spaces. Renderings by DBOX from the 200 East 83rd Street website depict the crown and upper floors, the motor courtyard, and ground level. The interiors are being designed in a collaboration with Robert A. M. Stern and Rottet Studio.

Homes come in one- to six-bedroom layouts and are priced from $2.05 million to $32 million. Two-bedrooms are priced at $3.175 million, three-bedrooms from $4.35 million, and four-bedrooms are asking $5.35 million. Three penthouses are available in five- or six-bedroom layouts with prices varying from $23 million to $32 million. Each penthouse comes with private outdoor space. Units begin above the seventh floor with a maximum of four homes per level. Apartments on the lower section average around 2,000 square feet each. Full-floor penthouses are located on the 32nd and 33rd stories, and above them is a duplex penthouse occupying the last two levels of the property.

All residents are given access to amenities including a gated motor courtyard; a spa with a steam room, sauna, and treatment rooms; a private courtyard and winter garden; a media room; and multiple children’s playrooms for different age groups. The 17th level is reported to be wholly dedicated to the wellness amenities and a landscaped terrace and yoga room.

200 East 83rd Street is slated for completion next winter, as noted on the on-site construction board.