A First Look at The Shephard, a New York Residential Building by Gachot Studios 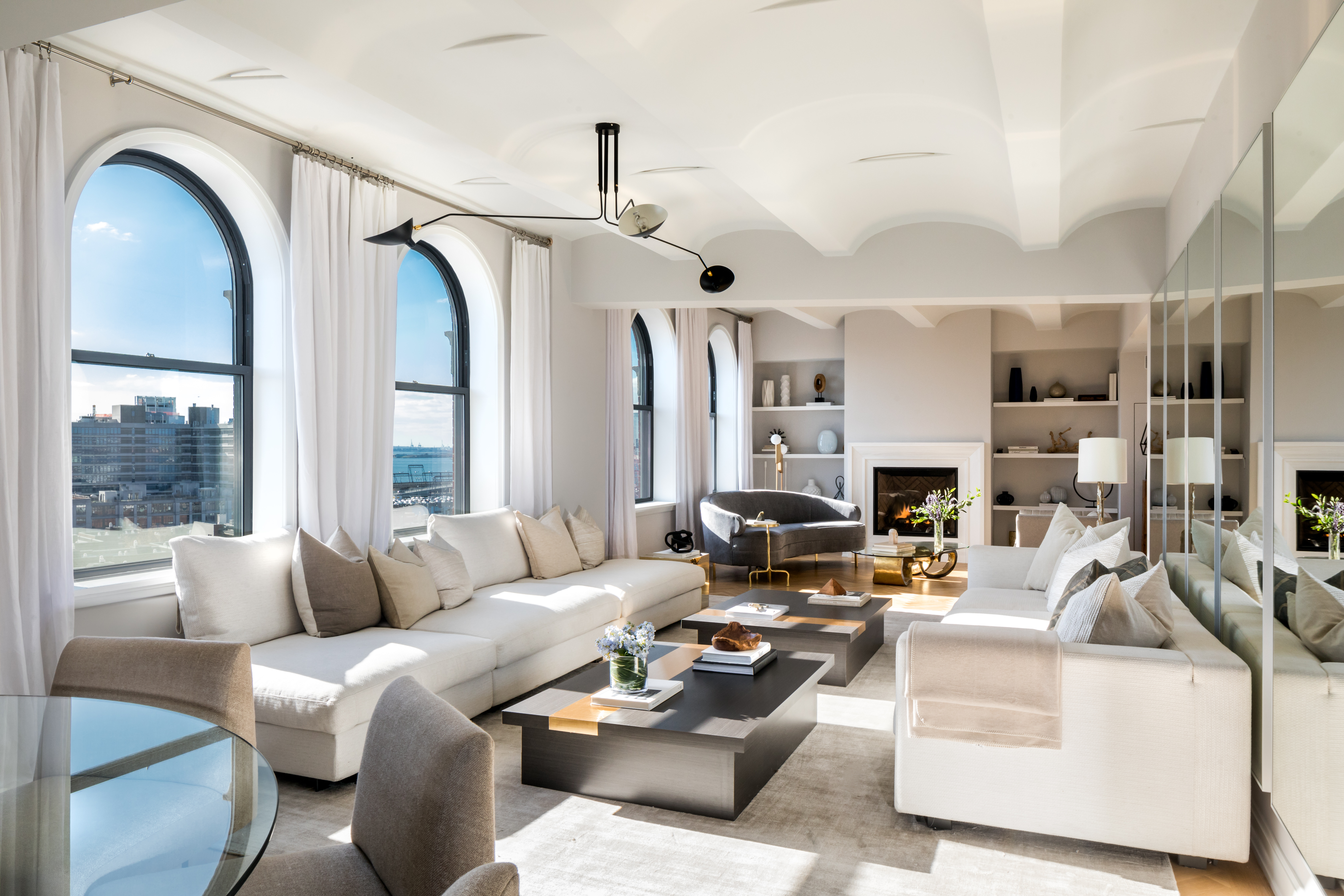 The tall, brick building on the northeast corner of Washington and West 10th Streets has lived many lives. Originally built in 1896 as a 12-story warehouse, the space was converted into apartments in the late 1970s. Now known as The Shephard (a tribute to the warehouse’s original name), it has been born again, this time as luxury condos developed by the Naftali Group with interiors by AD100 firm Gachot Studios. A gut renovation began in 2015, with architecture by Beyer Blinder Belle, completely scrapping the interior floor plan to transform 145 rental apartments into 38 spacious homes, most of which are three- and four-bedrooms. Miki Naftali—founder, chairman, and CEO of the Naftali Group—explains that he’s grateful to develop such a coveted patch of West Village real estate, a site where potential development sites are few and far between. “The building has proudly stood over its surroundings for more than a century,” he says. “We had to be true to its history and context while still being modern, elegant, and luxuriously cool.”

Though the building’s architectural heritage has largely been preserved (we covet those barrel-vaulted ceilings), it’s clearly been ushered into the new wave of “more is more” boutique real estate. “We knew from the start that because of its former life as an industrial space, the residential spaces wanted to be large and gracious,” Naftali explains. In true Gachot fashion, the space feels inviting, warm, and truly home-like, yet the amenity-laden common spaces feel like a prime hotel experience—the best of both worlds.

The lobby was actually a separate building from the condos when Naftali began developing—an unassuming two-story nestled halfway down the block. But it’s now become what Christine Gachot calls the “first impression space” (“lobby” she says feels too cold and formal). Gachot was inspired by a carriage house when she conceived the space. “I think its a really lovely moment to come in to,” she says. “There are 38 units that we did, and I don’t think you feel that way when you walk into the lobby. It creates a more intimate residential experience.” For a breath of fresh air, Gachot made the ground-level garden a focal point. Peek through the front windows and you’ll see an inviting, flora-filled terrace.

The original vaulted ceilings are a true architectural gem. “It’s great to celebrate the historical nature of the building and where you are in the city,” Gachot says. In the living room, peep through triple-pane windows at the sweeping downtown views. Gachot adds, “It’s so nice and to have a place that means something—its not something that was made up.”

In the kitchen, it’s hard to pick one focal point. The Statuary marble on the massive mahogany island? The herringbone floor made of a striking white oak? “We did the design, and Smallbone did the manufacturing,” Gachot explains. “They’re known, obviously, for their quality,” she says of the U.K.-based luxury kitchenmaker. With custom pulls and hinges throughout, Miele appliances, and mahogany cabinets, this type of kitchen is move-in ready—no decorator required.

“We tried to think through how people were living and give them that dream experience,” Gachot adds. “There are built-in banquettes in the kitchen areas; it’s done!”

With each unit’s ample square footage, Gachot carefully considered how it could be put to the best use. Her conclusion? The bathrooms. “There’s a proper foyer, overly generous closets—like the size of a generous studio apartment—and the bathrooms are generous,” Gachot says. “We talked a lot about where to use that square footage, and people spend a lot of time in their bathrooms and kitchens.” In the master baths, custom mahogany vanities feature fittings by Lefroy Brooks.

Another place to invest space? The master bedrooms.

Though the views from all units are desirable, the sights from a penthouse terrace are envy-inducing. “Washington Street is so wide,” Gachot notes. “I’ve worked over there in the past doing The Standard hotel, and that view corridor is really special.”

Amenities are often secondary in a project, no matter the level of luxury. At The Shephard, even the ping-pong table is custom—and BDDW at that. There’s a children’s room (featuring custom clay tile), game room, meeting space, rock-climbing wall, basketball court, and state-of-the-art fitness center. On my tour, I even hit a golf ball (badly) in the simulation space, which can be repurposed as a screening room. “With the Naftali Group, Miki in particular really took the approach like, ‘Let’s go all the way,’ and allowed us the freedom to create,” Gachot says. “There was really no value engineering project for this job, which is very rare.” 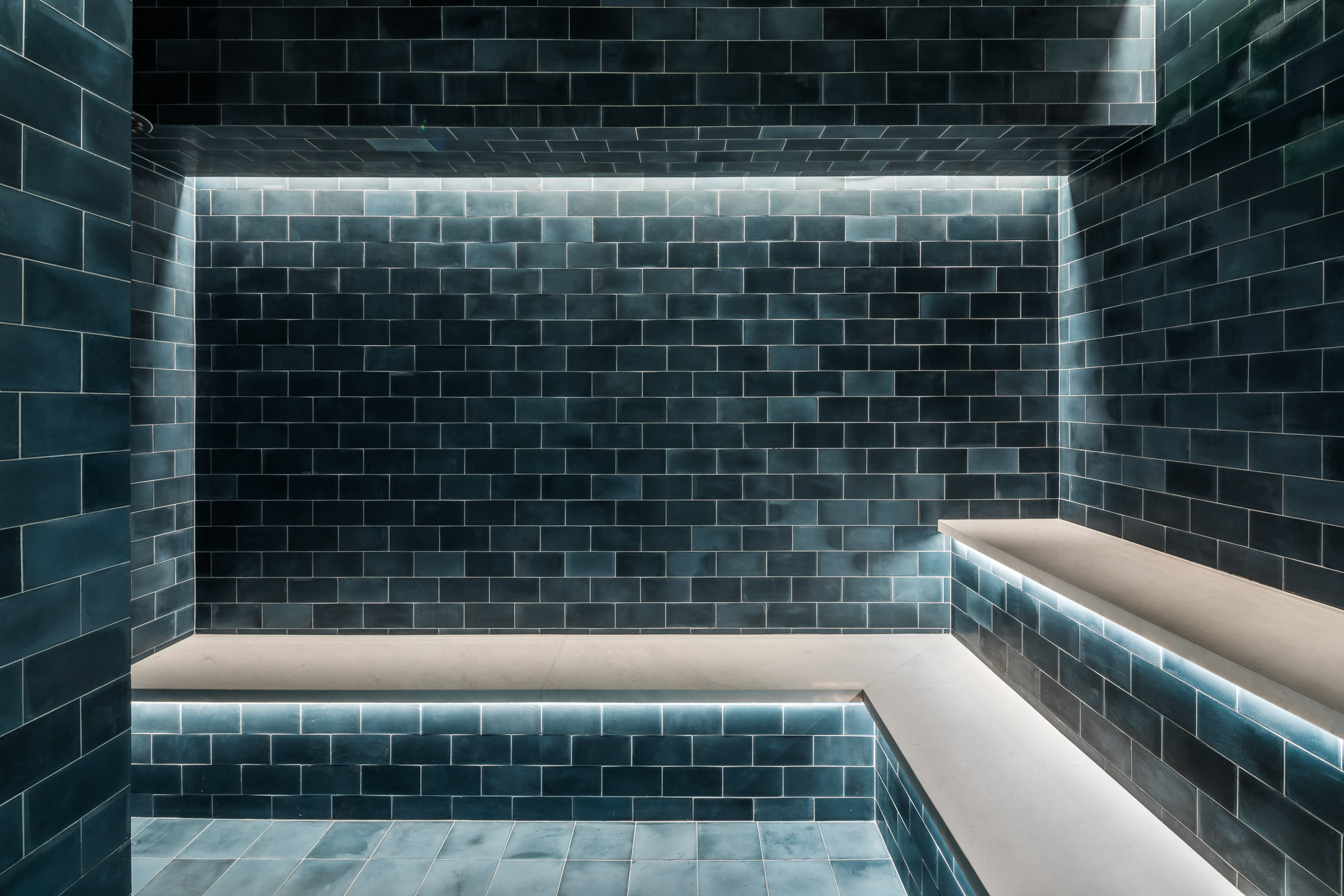 The Steam Room is a favorite of gachot.
Evan Joseph Images.

When asked to point to her favorite space in The Shephard, Gachot chose something unexpected: the steam room. Once inside, though, who can blame her? Clad in a glazed turquoise tile, it feels like a zen, underwater experience. “I don’t say this often, but it’s a very pretty picture,” Gachot says.