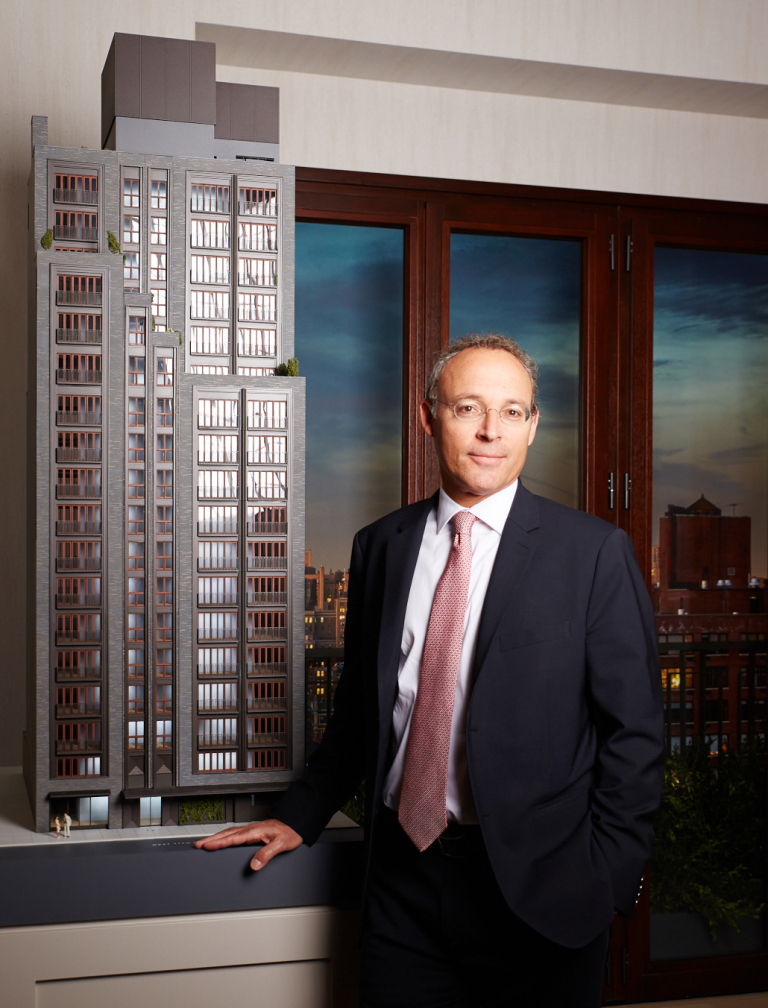 Among New York City developers active after the Great Recession, Miki Naftali has been one of the most prolific. Coasting back into the development limelight in the last few years, since founding his eponymous firm in 2011, he put up three rental buildings in Manhattan and Brooklyn and has built six Manhattan condominium projects after credit—and the real estate market—returned. So perhaps it is telling that the Tel Aviv-born chairman and CEO of The Naftali Group tells Commercial Observer what his business plan will be if prices don’t crater soon: “to chill.”

Sitting at the marble table of the model apartment/sales office of one of those Manhattan condos, 210 West 77th Street, Mr. Naftali used that word over and over when talking about the market both here and in Florida.

“The last few years, I have worked from early in the morning until late at night… [Now], maybe go to the beach?”

It’s not as though Mr. Naftali hasn’t tried to find viable projects. Indeed, he’s looked at about 1,500 deals in the last year and gone through the finer details of about 200 of those. None make sense.

“The fact is we like to be active. We like to build things, but we don’t want to do stupid things,” he said. When prices get as high as they are—asking prices are about $900 a foot in Manhattan for many deals he sees, he said—the risk of building something, and then seeing condo prices decrease, even a little, is too much. A developer shouldn’t plan on pricing continuing to grow, he said, and should instead be planning to be able to pocket more than $200 per square foot in profit at the end of the day. Anything else is unduly risky.

“We don’t want to be in a position where we overpay and then we work two, three years just to fix the problem,” Mr. Naftali said.

“To sell 14 units in four weeks—that is impressive at any price point in any market,” said Matt Van Damm, former COO of Town Residential and now an executive vice president for The Naftali Group. That is what happened at 210 West 77th, where the developer splurged on super high-end finishes and hulking kitchens, to attract the families that are the bread and butter of the Upper West Side market. The Naftali Group engaged U.K.-based Smallbone of Devizes to craft bespoke kitchen furnishings at the pinnacle of the quality spectrum—because that is what buyers at the moment want.

“He has very good taste,” said Alexa Lambert, with Stribling & Associates, who has worked with Mr. Naftali for more than a decade on a number of projects. “But [he] is constantly saying ‘it’s not about what I like … What should we be building?’”

So why not replicate this success? Now, building such projects just isn’t possible, with high land and construction prices in tandem. “Every site in New York, sellers and brokers are asking $900, $1,000 [per square foot], in some weird locations that you say, listen for $500, $600 I will buy them,” he said.

But unlike some of the newbies to the development game, Mr. Naftali isn’t getting over leveraged, or taking mezzanine loans, or going with random alternative lenders to get his next project in the ground. He’s chilling.

“A typical deal, we finance around 65 percent,” of the loan to cost (LTC) ratio, he said. He also works almost exclusively with large commercial banks such as PNC Bank, M&T Bank, Bank of America; he cites HSBC as a major go-to institution. “They aren’t going to lend you 85 percent” of the total cost, he said.

He also brings in equity partners, tapping large funds and both domestic and international family offices, he said, though he declined to name any of them. (However, of the Blackstone Group’s real estate practice, he said, “they are like a machine: amazing!”).

He also said he eschews preferred equity for Naftali Group projects, so that he and an equity partner are always on a level playing field. So far, he hasn’t had any troubles with this format.

Mr. Naftali was born in 1962 in Tel Aviv. He moved to the U.S. in 1987 to attend the University of Southern California. During his time in school, he became a property manager in order to help pay for expenses, later opening his own property management firm.

In early 1992, he moved back to Israel and started to work as a project manager. He began managing properties for Isaac Tshuva, a smallish Israeli contractor who would later became a tycoon worth more than $4 billion (by Forbes’ estimate).

In 2000, Mr. Naftali returned to the U.S., this time to New York City, and began managing what was then Mr. Tshuva’s small company with a small office in Fort Lee, N.J. named Elad.

In that role he oversaw the acquisition and development of a tidy portfolio of luxury development and conversion projects in Manhattan. By 2004, Mr. Naftali controlled a 49 percent interest in Elad Properties, a joint venture he formed with The Elad Group, a holding company led by Mr. Tshuva who was by then a global business magnate.

“In my Elad years I served as the CEO of Elad Group, CEO of Elad Properties and Chairman of Elad Canada,” Mr. Naftali said. By 2006, Elad owned $6 billion in assets in North America and Asia.

In 2004, the firm embarked on the $450 million redevelopment of the Plaza Hotel, for which it paid $675 million. That project hit some snags.

First, the developer got into a tussle with the hotel union. Mr. Naftali spent five days at City Hall hammering out an agreement with the group, eventually settling the dispute, and he thanked Mayor Michael Bloomberg for his help.

Later, the construction of some of the units, which took longer than anticipated, was decried as shoddy. And there were lawsuits. While they did not derail Elad in its entirety—indeed, one of the Plaza penthouses was, for a time, the priciest ever to trade in the U.S.—the project tarnished what had previously felt like a sterling reputation. Some thought that the criticism was why, in 2011, Mr. Naftali struck out on his own again, forming The Naftali Group. The new firm quickly jumped into the fray, closing 12 deals, many of them for development projects, in its first two years of operation.

Mr. Naftali says he left not because of the discussion around the quality of the work at the Plaza, but because he wanted to be back in the development saddle, acquiring sites where he can design buildings.

“I wanted to spend my time and energy where my passions lie,” he said.

This of course, makes his recent retreat from development all the more telling regarding Manhattan’s current market.

The timing for Mr. Naftali’s re-entrance to the market was perfect, in terms of the real estate cycle.

At The Bergen, a multifamily development in Cobble Hill, he said he got rents he never would have imagined.

“I paid $100 a foot with tax abatement three years ago,” Mr. Naftali said. “Today, the price is probably $400 a square foot without the tax abatement. It’s impossible to build rental today.”

“Miki has the vision to see how a beautiful block will come alive on a not-so-pretty street or a how a great apartment can be made out of a challenging pre-existing building,” said Ms. Lambert.

Of course the 421-a tax abatements that allowed The Bergen to rise are now in peril. Some in Albany want to scrap the program and the mayor’s office recently announced that they’d like to modify it. If the proportion of affordable to market-rate units changes too drastically, that could impede rather than improve the viability of developing multifamily rental housing, in Mr. Naftali’s mind.

“If the land is expensive and construction is expensive … how can you do it?” he asked. He said the city and the development community need to sit down and have a dialogue. He also emphasized that he thought selling the 421-a certificates should be encouraged, so that developers can build in one venue, likely market-rate residential in prime Manhattan, and sell the abatement to someone else who can develop affordable in another setting that may be more fitting, say, the Bronx, as Extell Development did with One57. Or so the thinking goes.

“I don’t think anyone should expect that at 220 Central Park South, affordable units should be built,” he said. He added that he was a big fan of the Vornado Realty Trust development, and said he has high hopes for its market performance. “It’s like 15 Central Park West on steroids,” he said. High praise, though hardly unexpected for Vornado, one of New York’s most esteemed developers.

Which brings him to another important fact about constructing new buildings right now: as it gets harder, many players will drop out of the game.

Indeed, other developers of his stature have said that the New York City residential real estate market is nearing the point in the cycle where the wheat is separated from the chafe. At a recent conference, one experienced manager of institutional real estate debt speculated that when rates rise, the ranks of developers will be thinned.

“That will cause volatility, which is great for those that trade in it,” the manager said, speculating that a coming uproar will turn players into “capital haves and have-nots,” with the have-nots leaving the market permanently.

Mr. Naftali was a tad less gleeful, but agreed with the assessment.

“It’s not good for the market that they will not make it,” Mr. Naftali said. “I wish for them to be able to find a way to get them done.”

The pitfalls to which such developers could succumb are multitudinous.

“New developers are willing to take other means,” to get a development underway, he said. Some strategies in that category might include very high LTC ratio construction loans, which would have higher interest rates, or maybe even mezzanine funds from so-called loan-to-own shops, which practically salivate as developers overreach and start to fall.

Closing his era of expansion, Mr. Naftali is even bearish in Miami, where condos have flown off the shelves in recent years, swept along by an influx of South American money. The Naftali Group opened a Miami office in 2014, but for the moment he is “chilling” there, as well.

“Interestingly enough, South Florida is in an even more … sensitive phase than the New York City market,” he said.

There are, in fact, about 50,000 units in the construction or design pipeline, he said, and only absorption of about 6,500 per year. Rentals, surprisingly, are no better, with “nine or ten times” the needed inventory coming down the pike.

Still, he is negotiating on three development sites at the moment, he said, and believes that the tide is beginning to turn—that developers like him have managed to send a signal to sellers that no matter the headlines of blockbuster sales, there is resistance in the market.

“We see potential sites that are not being traded,” he said. “They are just not selling. Which I believe will lead the sellers and brokers back to reality. And we will be there the minute that we see it going back to reality.”