“I Don’t Buy That NY Is Dead”: Naftali, Seinfeld Team Up on Billboard 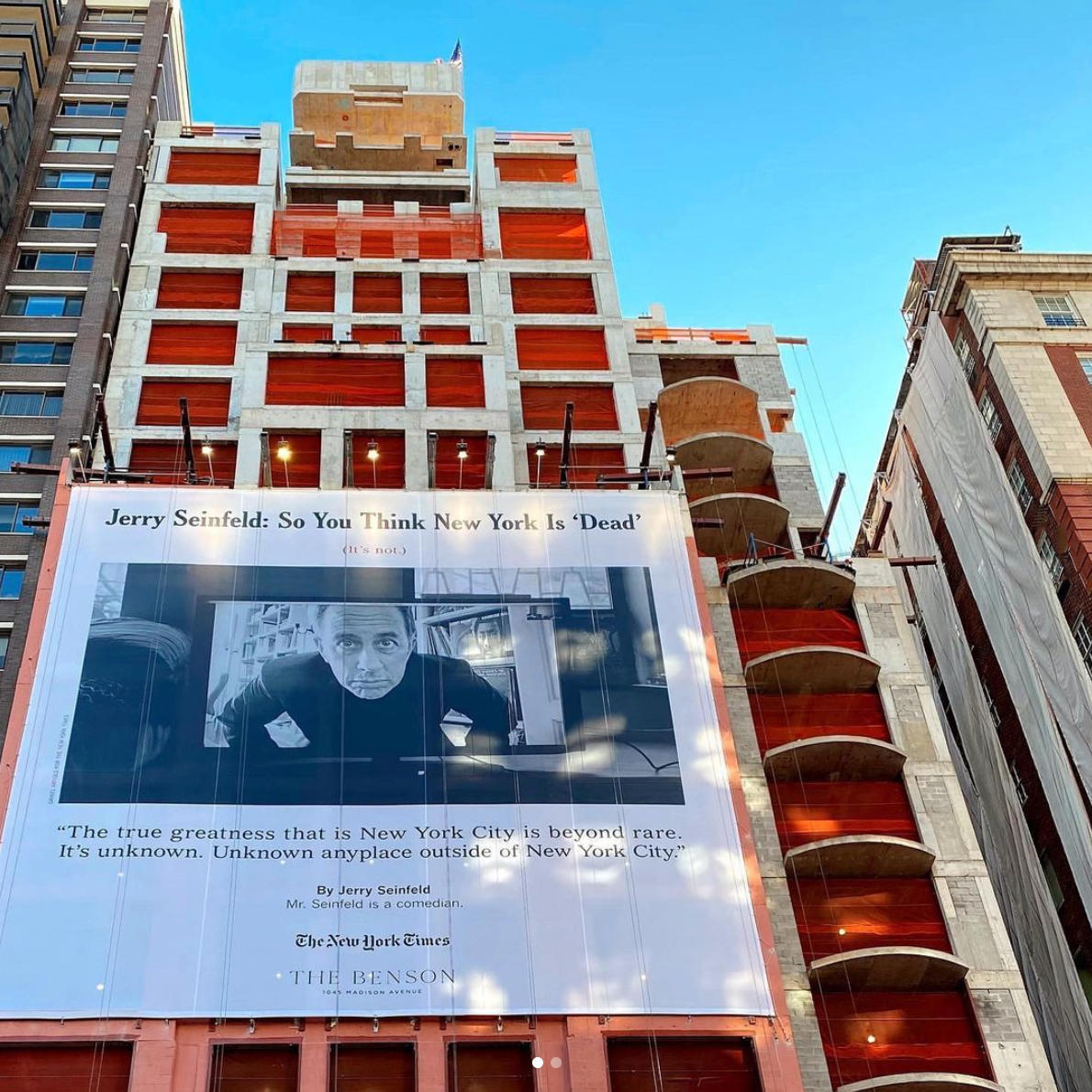 Miki Naftali got some unexpected partners for his latest venture. The residential developer has joined forces with comedian Jerry Seinfeld and the New York Times on a marketing maneuver to bolster enthusiasm for New York City. On Friday night, a crane erected a giant billboard on the side of the Naftali Group’s under-construction condominium at 1045 Madison Avenue featuring an image of Seinfeld’s ode to the city published in the Times in August. Seinfeld penned his op-ed in response to a LinkedIn post a few weeks earlier by comedy club owner James Altucher that proclaimed “NYC IS DEAD FOREVER” and explained why he, and most people he knew, were moving away. In his rebuttal, the comedian berated Altucher as “some putz on LinkedIn wailing and whimpering,” and issued a rallying cry to New Yorkers. “We’re going to keep going with New York City if that’s all right with you. And it will sure as hell be back,” wrote Seinfeld. “Because of all the real, tough New Yorkers who, unlike you, loved it and understood it, stayed and rebuilt it.” In a phone interview, Naftali said the idea for the billboard came out of a brainstorming session with his daughter Danielle, the manager of marketing and design at Naftali Group, over holiday signage to put up at the Madison Avenue project. “First of all, I love Jerry and, second of all, I agree with everything he said,” said Naftali. “I just don’t buy this story about ‘New York City is dead.’” Their goal was to obscure the eyesore of construction for Upper East Siders and engender some goodwill from neighbors (some of whom were unhappy with the project last year). The younger Naftali reached out to Seinfeld, who asked the Times for permission to use the image and headline of the oped. The Times confirmed that it approved the billboard’s display through April 31. So far, the message has been received well on social media. A few of the city’s elite have shared the Naftali Group’s Instagram post of the billboard, among them actress Mariska Hargitay, Seinfeld, and his wife. But the city’s real estate industry is facing major headwinds, as Covid triggers tighter restrictions and companies open offices elsewhere, especially in Florida, where Altucher moved.