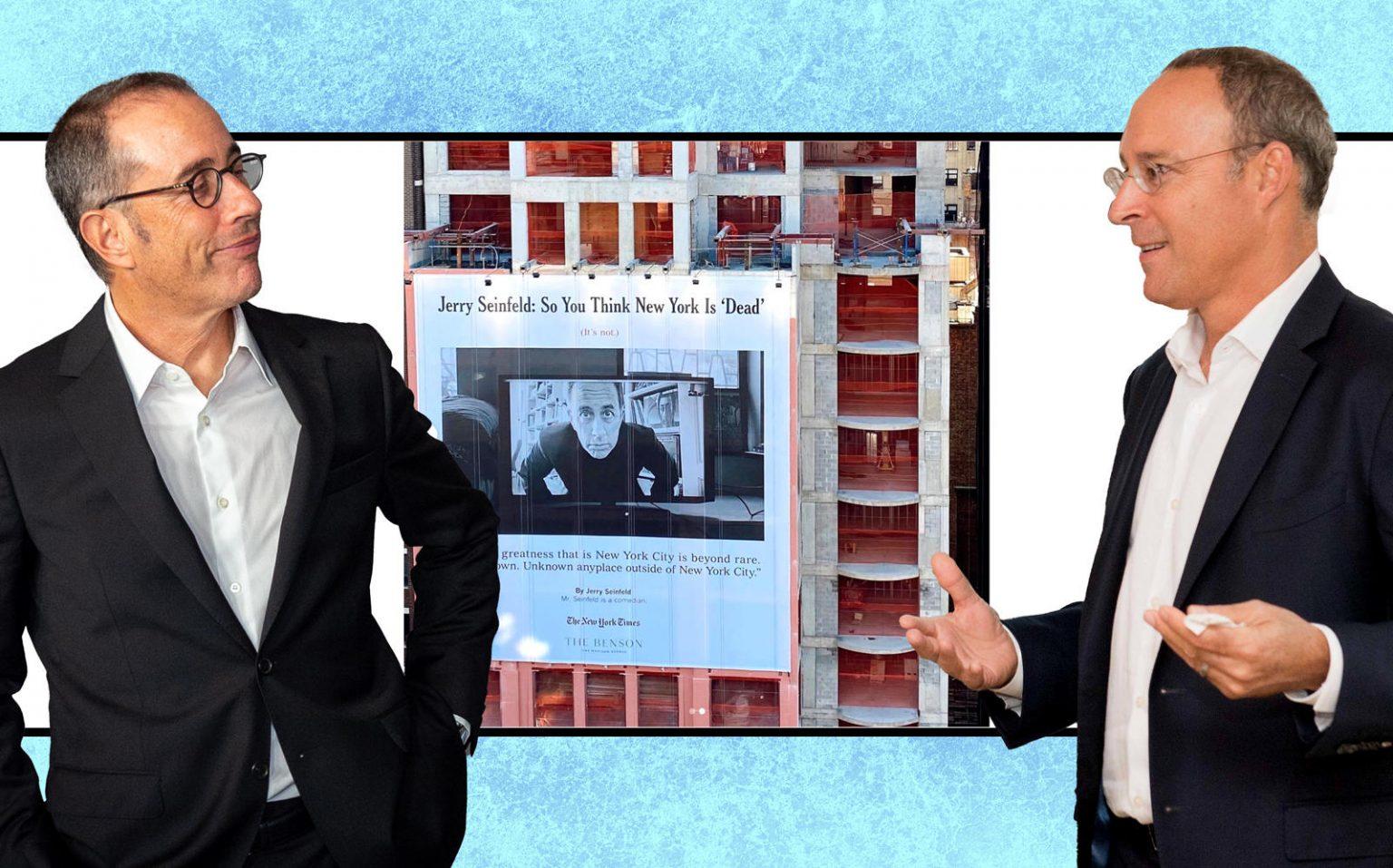 Jerry Seinfeld and Miki Naftali from the Naftali group (photos via Getty; Instagram) Billboard at 1045 Madison Avenue (Instagram photo) Miki Naftali has acquired several unexpected partners for his latest venture. The residential developer joined forces with comedian Jerry Seinfeld and the New York Times in a marketing maneuver to boost enthusiasm for New York City. On Friday night, a crane erected a giant billboard on the side of the unfinished Naftali Group condominium at 1045 Madison Avenue with a painting of Seinfeld ode to the city published in the Times in August. Seinfeld wrote his post in response to a Post on LinkedIn a few weeks earlier, comedy club owner James Altucher had said, “NYC IS NINE Dead,” explaining why he and most of the people he knew were leaving. In his refutation, the comedian cursed Altucher as “some disgust on LinkedIn who whines and whines,” and shouted to the New Yorkers. “We’ll continue in New York if it’s okay with you.” And it will definitely be back, “Seinfeld wrote. “Because of all the real, rough New Yorkers who, unlike you, loved and understood it, they stayed and rebuilt it.” In a telephone interview, Naftali said the idea for the billboard was based on brainstorming with his daughter Danielle, marketing and design manager at the Naftali Group, during holiday signs to reconcile with the Madison Avenue project. “First, I love Jerry and second, I agree with everything he said,” Naftali said. “I just won’t buy this story about ‘New York City is dead.’” Their goal was to cover the eyes of the building for the East East Siders and to evoke some goodwill from the neighbors (some of whom were unhappy with the project last year). The younger Naftali reached out to Seinfeld, who asked the Times for permission to use the image and title op-ed. The Times has confirmed that it has approved the display of the billboard by April 31. So far, the report has been well received on social media. Several elites of the city shared Instagram’s contribution on the Naftali Group’s billboard, including actress Mariska Hargitay, Seinfeld and his wife. But as Covid launches, the city’s real estate industry is facing big headwinds stricter restrictions and companies open offices elsewhere, especially in Floridawhere Altucher moved. Even Naftali admitted that New York faced “a lot of problems.” The main one for developers is the market for the sale of residential real estate in Manhattan: the transactions are a decrease of 46 percent year-on-year are the values of real estate falling and it’s here mountain inventory dominated by luxury apartments. Naftali has a large share in the city attempt to return. People who can afford his apartments have probably left town beach houses in the Hamptons, Connecticut, New Jersey or Florida, among others. When the pandemic hit, no neighborhood cleared more than Manhattan. The billboard apartment on East 79th Street is called The Benson and has 15 residences for $ 12.5 million and up. The sale began in September, and the developer claimed that five units were already under contract for more than $ 84 million. According to the original offer plan, the limestone facade project expects sales of more than $ 220 million. The closures are to start at the end of next year, when construction is completed. Naftali also has second housing project takes place on the Upper East Side. The developer bought the site last year, also along Madison Avenue, for $ 71 million from the Vornado Realty Trust and submitted plans in May. Naftali but denied a billboard in 1045, Madison had something to do with the sale of apartments. “If that was the intention, I would give a picture of a beautiful living room,” he said. “I’m just trying, you know, to help as much as I can.” The developer seems to enjoy the work of himself and his daughter. He stood beside him for an hour on Saturday, watching as people saw the new brand and stopped taking pictures. “Let’s hope it creates a little.” [of a] good atmosphere, “he said. “Not everything is bad here.”