The 10 Priciest Manhattan Condo Filings of 2021 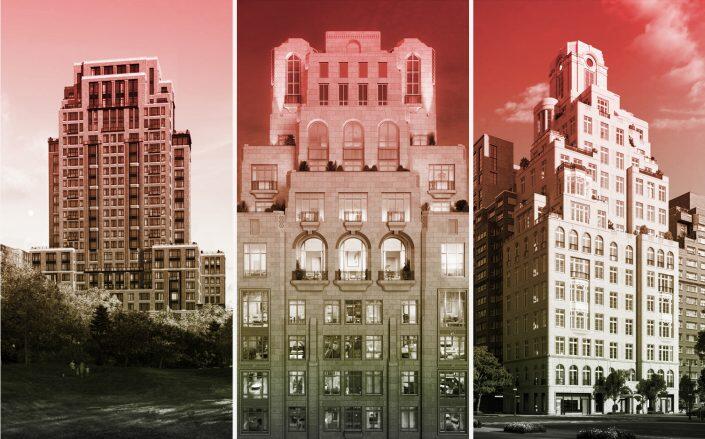 Manhattan condo developers came back from the drawing board this year with some new preferences: All glass is out, while stone and brick facades with large windows are in. And pricing is up, at least for the 10 most expensive condo offering plans accepted by the attorney general’s office this year. They collectively aim to pull in $3.14 billion, nearly 70 percent more than last year’s 10 priciest, which projected a sellout of just $1.86 billion. This year’s filings are on par with 2019’s, when the total sellout of the top 10 projects came to $3.1 billion. But gone are the heady days of 2018, when the 10 priciest accepted projects sought a combined sellout of $7.3 billion. That year featured two projects that each wanted $2 billion for all their apartments combined. There hasn’t even been a $1 billion condo project since. Condos on the Upper East Side grabbed four spots in this year’s top 10, accounting for 187 residences and a combined sellout of $1.18 billion. Naftali Group is the sponsor behind two of those, The Bellemont and 200 East 83rd Street, which is being developed with Rockefeller Group. Between the two projects, Naftali is looking to sell 98 units for $765 million. Another notable detail: Of the 10 most expensive projects, not one is a glassy tower. Even in the buildings with floor-to-ceiling windows, each window is framed with exterior stone features. Developers appear to be taking a cue from the stately, limestone-clad 220 Central Park South, the most profitable condo ever.

Here’s a look at the priciest new condos that launched sales this year, based on The Real Deal’s analysis as of Dec. 3.

Naftali Group’s second Upper East Side project is a 12-unit condominium on the corner of East 86th Street and Madison Avenue. The building is also designed by Robert A.M. Stern Architects. One buyer signed a contract in November to purchase the two duplex units that occupy the top four floors at the building. The developer was asking $67 million for those units; no sale has been recorded.

Naftali and Rockefeller Group’s 83-residence tower on Third Avenue and East 83rd Street is being designed by Robert A.M. Stern Architects with interiors by Rottet Studio. Amenities include a porte-cochère with an automated parking garage, game rooms for children, a 70-foot pool and fitness center with city views.