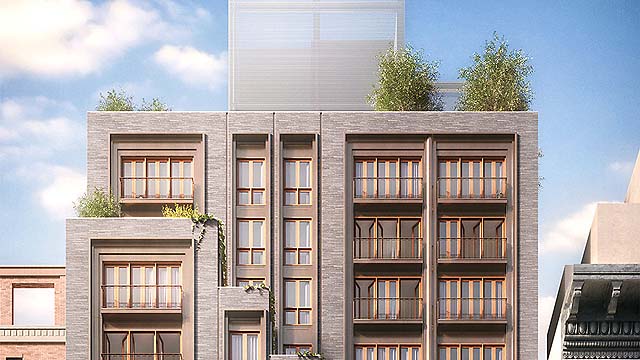 For its second sales launch, Naftali Group decided to change the finishes and increase amenity space at 210 W. 77th St. instead of slashing prices – and it’s paid off.

A new sales team and an interior redesign is all that Naftali Group’s new Upper West Side condo development needed to jump-start sales. In stark contrast to its initial launch last year—when the apartments sat on the market for several months—within the past 11 days, nearly half of the units have gone into contract for a total of $70 million.

The developer first launched the 25-unit building at 210 W. 77th St., between Broadway and Amsterdam Avenue, in September. But after nearly four months without a single sale, Naftali pulled the apartments off the market and shut down the project’s website. The lack of interest was partially due to the slowdown in the luxury condo market, resulting from a glut of pricey apartments that gave buyers more options.

“We took the time to listen to the marketplace and respond to the feedback we received from our target audience,” Miki Naftali, chief executive of the Naftali Group, said in a statement. “We are confident that buyers will love the changes we’ve incorporated.”

Rather than cut prices, Naftali decided to redesign the apartments with higher quality interiors and upgrade the amenities of the 18-story building, essentially increasing what potential buyers would get for the same prices, which start at about $4.7 million depending on the size of the unit. A $12 million duplex townhouse was among the 11 recent sales. Additionally, Naftali changed brokers and hired Stribling Marketing Associates. Corcoran Sunshine Marketing Group originally handled sales and marketing for the project.

“Corcoran Sunshine was great, but we are working with Alexa Lambert (of Stribling) on all of our other projects in collaboration with Naftali Marketing,” a spokeswoman said in a statement, noting that Ms. Lambert is now heading up all of Naftali’s marketing and sales activities. The Upper West Side building is designed by Thomas Juul-Hansen, and is set for occupancy in the fall of 2016.