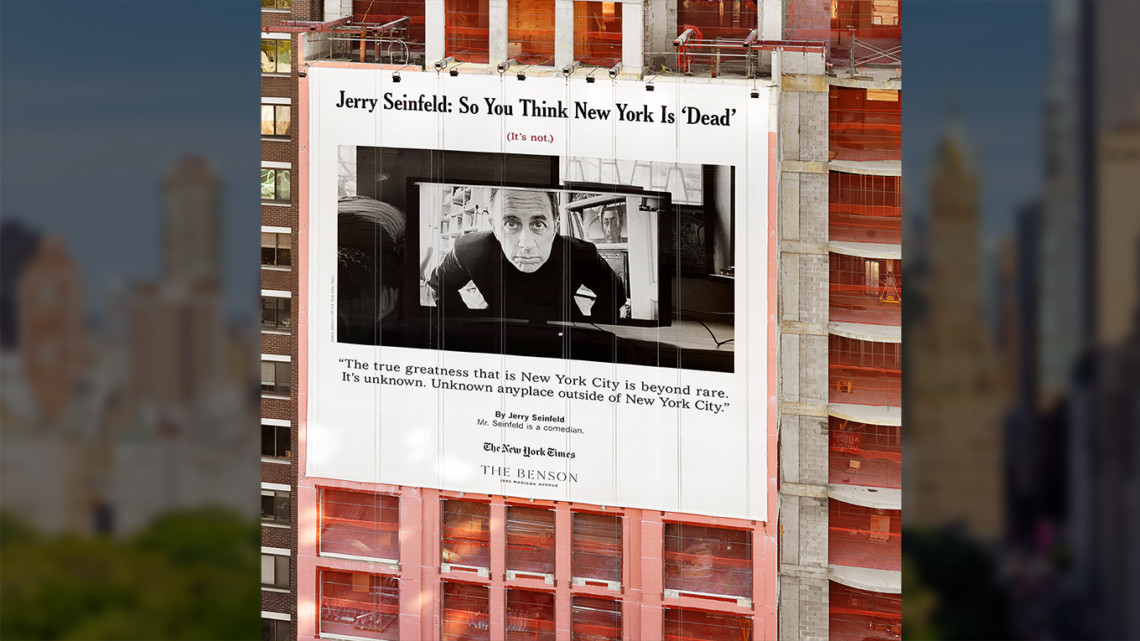 Comedian Jerry Seinfeld’s widely discussed New York Times op-ed piece rebutting those who think New York is ‘dead’ continues to get noticed months after it was published—not because of social media sharing, but rather because it’s featured on the facade of a 19-story luxury condominium building now under construction on Manhattan’s Upper East Side. The banner, which was installed in mid-November, is made of scaffolding mesh and measures 55 feet wide, 55 feet tall and six stories high. It features a black-and-white photo of a rather sullen-looking Seinfeld, glaring in front of a wall of bookcases. Prominently displayed on a building to be called the Benson, the banner’s headline says: “Jerry Seinfeld: So You Think New York Is ‘Dead,’” followed in smaller type by “(It’s not.)” “The true greatness that is New York City is beyond rare,” notes a quote from his opinion piece. “It’s unknown. Unknown anyplace outside of New York City.” The billboard, while not directly advertising anything, was created by the building’s developer as a way of sharing a message of solidarity for the city. It has received quite a bit of attention, often positive but occasionally negative, thanks to both its real-world visibility and how it’s been shared online. Miki Naftali, chairman and chief executive of the Naftali Group, developer of the Benson, said the concept for the banner arose during a brainstorming session with his daughter, Danielle, his company’s manager of marketing and design. She contacted Seinfeld’s representatives; the comedian approved the use of his op-ed material—including the photo that illustrated it—but said the newspaper would have to sign off as well. The Times gave Naftali permission to reproduce its photo, headlines, quotes and logo through April 30, 2021. This is not the first time Naftali has creatively promoted buildings under construction during the year-end holiday season. In 2015, for a project on the Upper West Side, he commissioned James Gulliver Hancock to create a banner with cartoons of residents of apartments then being built: Naftali said the Seinfeld banner was not meant to promote the Benson, which will contain 15 three- to seven-bedroom condos ranging in price from $12.8 million to $35 million. “I just wanted to do something to try to help,” he said. “It’s been a very difficult, unique year. I decided, ‘Let’s do something like (the banner).’ It’s gotten a lot of attention, more than I expected.” Agreeing with Seinfeld’s sentiments about the durability of New York, Naftali said, “All the major cities around the world are suffering, but I don’t buy the notion that urban living is dead.” Others agreed, including several celebrities who commented on an Instagram post featuring the banner by Seinfeld’s wife, Jessica; he reposted her post. Those replying to Jessica Seinfeld’s post included authors, journalists, socialite Nicky Hilton and actors such as Julianne Moore and Natasha Lyonne. https://www.adweek.com/brand-marketing/how-a-jerry-seinfeld-op-ed-became-a-6-story-billboard-on-the-uppereast- side/ One critic of the banner is Edgar Ballestras, a New York-based photographer from Queens. Commenting on Instagram on Jessica Seinfeld’s post, he said: “This is completely obnoxious. As a native of Queens who lost his mother due to COVID-19 in April, I don’t really care what Jerry thinks. He could write his op-eds but we don’t need this nonsense. For thousands of New Yorkers, who lost a loved one, the last thing they want to see is Jerry’s face plastered on a building. The thing that annoys me the most is his last line, ‘see you at the club.’ Who gives a shit, we are trying to stay safe.” Neither Jerry nor Jessica Seinfeld was available for comment for this article. According to Naftali, five of the Benson’s 15 condos—including two penthouses priced at $22 million and $35 million— have been sold, though these sales preceded installation of the banner. The building—which will contain amenities such as a rooftop lounge, spa, cinema, fitness center and half-basketball court—is slated to open late next year. Although Jerry Seinfeld wasn’t involved in the creation of the billboard outside of approving it, he’s dabbled in advertising occasionally throughout his career. A fan of advertising’s golden age of the 1960s, Seinfeld worked with American Express on branded content in the early 2000s and wrote several ads for Acura in the 2010s. Awarded a Clio in 2014 for his contributions to advertising, Seinfeld offered up an unforgettable acceptance speech that both praised and eviscerated the ad industry.