Naftali Is Big Winner In Upper East Side Condo Comeback 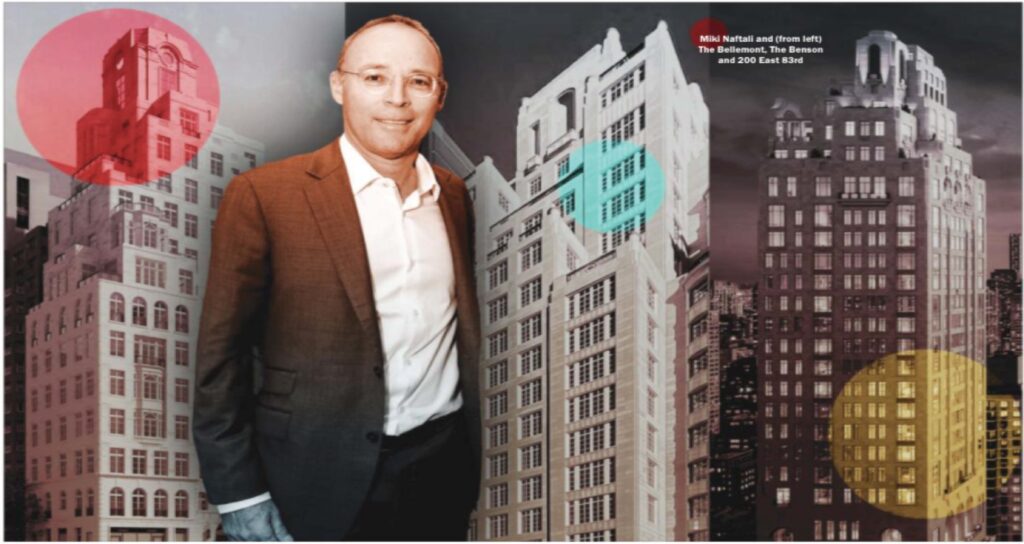 Just over a year ago, Miki Naftali spent about an hour standing on the sidewalk outside his upcoming project at the corner of Madison Avenue and East 80th Street. He was watching for people to notice the giant billboard he’d hung from the building’s façade, featuring an op-ed by Jerry Seinfeld on why New York wasn’t dead.

“Hopefully, it will create a little bit [of a] good vibe,” he said at the time. “Not everything is bad here.” Whether the move was that of a desperate developer trying to sell pricey condos in one of the most challenging markets in recent times or a full-throated defense of the city is up for debate. But what is undeniable is that a year later, the tide has turned for Naftali. The condo at 1045 Madison Avenue where the billboard was hung, called the Benson, is now fully sold out — and is one of the best-performing buildings on the Upper East Side.

“No matter how we analyze the data, Naftali’s projects are carrying the new development market on the Upper East Side,” Kael Goodman, CEO of Marketproof, said in the firm’s report. Goodman noted that the asking prices at the two Naftali projects were near the neighborhood’s average of $2,945 per square foot. The offering plan for 200 East 83rd was accepted in April with prices ranging from just under $6 million to $35 million, which averages out to $3,590 a foot. The building is nearly two-thirds sold, per Marketproof. The Benson’s asking prices were higher, at $4,368 per square foot for the building’s 15 units.

The developer is also reporting sales contracts at a third project at 1165 Madison Avenue, known as the Bellemont, and units are getting snapped up. In November, a buyer purchased the two duplex units, asking a total of $67 million, on the building’s top four floors with plans to combine them, according to Olshan Realty’s report.

Naftali said that his analysis of existing inventory led him to believe the neighborhood was “lacking of a really, really good product with all the modern amenities, the ease of life that we are doing in many other projects in the city.” Part of that means allocating valuable floor space, often on higher floors, for common space. At 200 East 83rd, for instance, the pool, spa and fitness center are located on the 19th floor. Naftali also opted for a Classical stone façade, which has become a fixture of New York’s luxury condos ever since Robert A.M. Stern’s design for the Zeckendorfs’ 15 Central Park West. What the three Naftali projects have in common are high ceilings and big windows allowing a lot of light in.

Naftali is also known in the market for not negotiating with buyers on price — the asking price is the price, no exceptions. The developer confirmed this, saying it saves time and allows for a less acrimonious sales process. Unlike many other condo developers, he said, he doesn’t build with foreign or absentee buyers in mind, but instead for full-time New Yorkers. “When you rely on foreign buyers, it’s much more volatile. You can either do fantastic when they’re here or it can be almost dead,” he said. “This is just not my type of business.”

These projects’ design elements aren’t exclusive to Naftali. Victor Sigoura, who started his career with Naftali before launching Legion Investment Group, filed plans for a 33-unit condo at 109 East 79th Street in the fall of 2020. With a limestone and hand-laid Roman brick façade, the building has 13-foot ceilings and 7,000 square feet of amenities on higher, windowed floors. A year later, the building reported sales contracts for 17 units, making it the third best-selling new development in the neighborhood, according to Marketproof. (Sigoura said that sales were higher and the building was 70 percent sold.) “I think that [our] buyer is looking for that great co-op feel but in a more modern way,” said Sigoura.

There’s also Icon Realty’s Beckford House & Tower, a two-tower, 104-unit development on Second Avenue between East 80th and 81st streets. The buildings were designed by architect William Sofield’s firm and are clad with brick and, on lower floors, limestone. Sofield said stone façades bring a level of privacy to residents and hint at an overall quality. “There’s a safety and security in thinking that ‘Well, the rest of the building must be well-built,’” he said. But that comes with an understanding that it will cost more, he added, because “harkening back to real craft” is much more time-consuming and expensive. Paul Whalen, a partner at Robert A.M. Stern’s firm who led the design for Naftali’s Bellemont and the East 83rd Street project, recalled advice that Steve Roth, head of Vornado Realty Trust and developer of the record-smashing 220 Central Park South, gave him. “If you do great quality in New York, prices will stretch,” Whalen recounted Roth saying.

The stone exterior has become table stakes for new development seeking top dollar. Of the 10 most expensive condo offering plans filed in Manhattan this year, none were for glassy towers. What ups the ante for Classical design in the neighborhood is the desire for a nice-looking building that could be mistaken for one of the storied co-ops along Fifth Avenue or Park Avenue — so long as observers suspend any judgment about building height and, crucially, location. Buyers used to insist they would not go east of Park or Lexington avenues, but much of the current activity lies in the former no man’s land of Third and Second avenues. “It isn’t about which block,” said Richard Ferrari, CEO of Douglas Elliman’s New York operations. “It’s about the Upper East Side. That attribute has changed.” Whalen said that his firm’s residential projects have increasingly been boutique luxury condos. “We think of it as an opportunity to come in and do something great and change the street,” he said. “We’re in a golden age, because there was a long time where that never happened in New York,” he continued. “Now those sites are being considered again. To me that says so much about New York right now.” Many of the buyers seem to already live in or frequent the neighborhood.

Developers and sales agents at all of the aforementioned condo projects said that a significant number of buyers were people who walked by the project and then contacted the sales team. Whalen attributed that interest in part to the pandemic as well as rising crime rates in the city. “New York, starting with the pandemic, has gotten a bit more difficult,” he said. “The Upper East Side is still seen as a classic, safe and civilized neighborhood.”

In Naftali’s case, though closings have yet to begin at his three projects, it appears the developer isn’t done with the area. In late November, he said he was working on a new assemblage. A week later, he closed on two parcels on Second Avenue, between East 77th and East 78th streets, for $73 million.