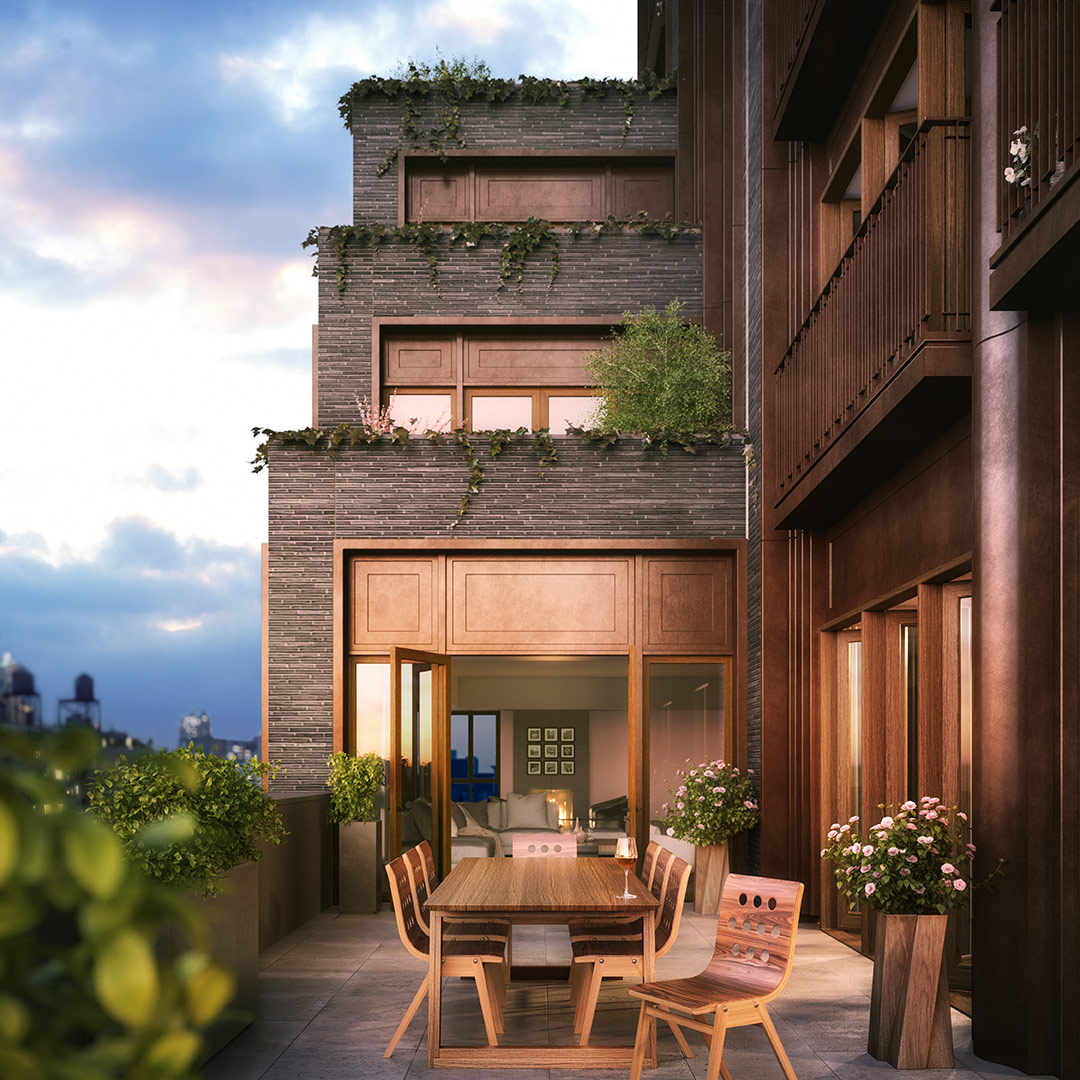 On Manhattan’s Upper West Side, the Naftali Group is building neighboring condos

On the northern side of West 77th Street, an 18-story building of luxury condominiums is under construction. On its facade, which has Juliet balconies, greenery will cascade down terraces that give the illusion of stairsteps.

On the southern side of West 77th, an 18-story building of luxury condos under construction also will have Juliet balconies, and greenery that cascades down terraces, providing the illusion of stair steps.

The twin buildings were, for the developer, a happy coincidence.

In June 2013, the Naftali Group, looking to build luxury condos, spent $55 million for a site occupied by a rental-car garage on the south side of West 77th Street, between Amsterdam and Broadway on the Upper West Side.

They hired Thomas Juul-Hansen as the architect for the design, layout and facade. He designed a building he felt was modern but had Upper West Side character within the site’s zoning requirements, which dictate building height and setbacks.

“You have to figure out how to rationalize aesthetically a form that’s been given,” said Mr. Juul-Hansen, of turning zoning requirements into art.

Then, the developer’s head of acquisitions rented a car from a garage located nearly across the street from the construction site. A light bulb went off.

“He said, ‘We should really go for this,’” said Matthew Van Damm, the developer’s executive vice president for marketing. “‘We’ve already unlocked the puzzle.’”

It was the same size and had the same zoning.

So, having already poured time, money and love into the architectural plans, the Naftali Group used the same basic design.

“It was basically a no-brainer,” said Miki Naftali, the developer’s chairman and chief executive.

So one 18-story building became two.

This week, Mr. Juul-Hansen stood in the sales gallery for the northern building, which had replicas of some of the condos’ interiors.

He pointed to the kitchen’s floor, of stained white oak. Natural materials create a sense of timelessness, he said: “Nobody looks at oak and says, ‘Oh, that’s so 1752.’ ”

The buildings aren’t quite identical. The northern building’s facade uses a metal called Muntz, a mix of copper and zinc that has been used on the bottoms of boats.

The facade of the southern building has long, thin pieces of handmade Danish brick, some with tiny imprints from the fingers that made them.

“Every brick is different, and, like we humans, they all carry imperfections,” Mr. Juul-Hansen said.

The building’s interiors are different as well. The northern building has three two-bedrooms, seven three-bedrooms, eight four-bedrooms and eight five-bedrooms.

Asking prices range from $4 million for a two-bedroom to $23 million for the 6,000-square-foot penthouse.

The northern building has a half basketball court and wood-paneled library with billiards. The southern has steam rooms and a sports court with soccer goals and eight private parking spots, priced from $300,000 to $400,000 each.

Both have roof decks and elevators that open directly into the condos. An advantage of developing two buildings is the chance to visually change the entire block, Mr. Naftali said.

In front of the buildings, Naftali plans trees and landscaping, and will repave the sidewalks with glass-infused concrete, to create, its website says, a “subtle shimmer.”